Curse of the Chosen, by Alexis Deacon 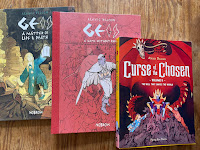 A little over four years ago, I posted about A Game Without Rules, the second volume in the Geis trilogy of graphic novels written and illustrated by Alexis Deacon. I said then that I eagerly awaited the third and final volume - but didn't anticipate having to wait quite so long.

Since then, the first two instalments of Geis have been issued in a single tome, now called Curse of the Chosen. And now, at last, comes what's called Curse of the Chosen Volume II: The Will That Shapes the World but I think of as Geis III. It's a slightly smaller size than Geis and in paperback, but the moment I opened the cover I was back in that extraordinary, strange world as if I'd never been away.

As before, we're in a weird fantasy castle where a deadly contest is taking place. Originally, 50 competitors vied with one another to become the new head of state, but that's been whittled down to a handful - and one of them is, we now realise, not at all what she seems. There's something here of Squid Game, only with magic and talking animals, perhaps mixed up with the Earthsea of Ursula le Guin. Plus the artwork is beautiful, even as the horror mounts. More than once I gasped.

One of the things that makes this story so effective, I think, is how much the odds are stacked against the kindly, heroic characters - a young girl, a small man and a cat. That strikes a chord with something TV mogul Sydney Newman says in his memoirs, having watched different audiences in front of the same movies.

“A revelation to me was discovering how to get a sure response from an audience: compassion.” (p. 99)

That's what this: extraordinary, imaginative and compassionate fantasy.