There's a lot by me in the new issue of Doctor Who Magazine. I've written the main cover feature, "Who is Ncuti Gatwa", a profile of the actor announced earlier this month as the new Doctor.

Had it not been for this exciting announcement, the cover would probably have gone to Peter Cushing, star of the 1960s Dalek movies that are being re-released this summer. There is lots about the films this issue, including two things by me.

In "Sets and the City", Rhys Williams and Gav Rymill recreate the sets from the 1965 film Dr Who and the Daleks, with commentary by me and Rhys. This month's "Sufficient Data" infographic by me and Ben Morris charts actors from the first Dalek movie who were also in TV Doctor Who.

(By nice coincidence, almost exactly 20 years ago, my first ever work for DWM was a feature on that first Dalek movie and big-screen Doctor Who generally. That was a cover feature, too.)

Plus, in "Hebe Monsters", I speak to Ruth Madeley about playing Hebe Harrison, new companion to the Sixth Doctor in his latest audio adventures.

Given all this, they've also put a photo of niceish me on page 3, taken by the Dr. 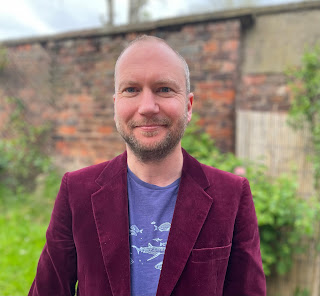