The Animals in That Country, by Laura Jean McKay 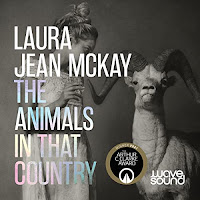 Jean's life is a bit of a mess. She wants to be a ranger in the wildlife park where she works, but can't get her qualifications - and is secretly drinking and, worse, keeps telling visitors what the animals all say, against all the rules about anthropomorphising them. The boss of the park - who is also the mother of Jean's granddaughter - is running out of patience. And then a new kind of flu hits Australia, and suddenly all the animals talk...

This is a strange, unsettling book, initially about a pandemic (by coincidence, apparently, despite all its similarities to Covid) and then something more profound. Animals communicate in myriad ways - gesture and scent as telling as sound. Some of what they say is quite disturbing. Beloved pets turn out to be crazy, driven mad by having their wildness constrained. There's something of that, too, in the humans, Jean's wild excesses barely kept in check - and she's not alone. She has a secret drinking buddy at work, and is having an affair with an otherwise gay man. From the evidence here, we are messy creatures, all of us bad dogs and cats. People are animals, driven by hunger and lust and excreta, things of flesh and need. What follows is visceral and vivid, so the effect is like an extended dream, verging on nightmare.

To begin with, the heart of the book is Jean's relationship with her granddaughter Kim, who seems to be offer Jean her one hope of salvation - she'll be a better person for Kim. There's then a resounding awfulness when Kim goes missing, but on the quest to retrieve her that follows Jean forms a bond with one of the wildlife park's residents, a dingo called Sue. What's extraordinary is how much we get into Sue and other animals' heads, how much we understand - before the gut-punch ending when it's made plain how little we can know about what really goes on in someone else's skull. That's what this is about: our connections and lacks of connections, human or otherwise.

It's an often funny and sometimes uncomfortable read, sort of Shameless and Ridley Walker and The Road all in one, with something of the setting of Mad Max. But that tantalising sense of understanding animals makes it like nothing else. I can see why this won last years Clarke Award.