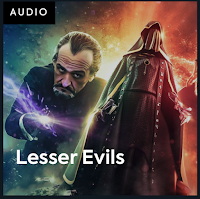 The official Doctor Who people (praise the company!) have released a timeline of forthcoming multimedia jamboree Time Lord Victorious.

Among the books, comics, audio dramas, escape rooms, figurines and whatever else, there's a whole page devoted to my short story Lesser Evils, including the following sentence from the thing itself:

Death descended on the planet Alexis one bright and crisp, clear morning...

Lesser Evils is performed by Jon Culshaw and features the version of the Master originally played by Anthony Ainley. It's set on a planet I named after the amazing Alexis Deacon, author of Geis.