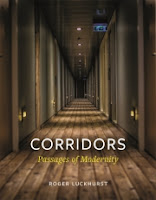 I've submitted a review of this for publication elsewhere, but Professor Roger Luckhurst (who I know) has produced a fascinating history of corridors in architecture and imagination.

His argument is that the corridor is a modern conception, the name deriving from the Italian verb "currere" meaning to run - the same root as our word "courier." The architectural sense came in the fourteenth century: a "corridoro" was the path kept clear behind defences along which messengers could run. It was then used in large buildings - the swift bypass meaning you didn't have to go through in room in turn. In a royal palace, where status could be defined by proximity to the monarch, that bypass had political implications. Without the need for interconnecting doors, rooms could be isolated - changing our sense of private space.

Roger covers a great deal of ground here - a long corridor like the ones he describes in the pavilion hospitals brought in by Florence Nightingale. He covers hospitals, prisons, asylums, universities, private homes, corridors in films, and the way the modern idea of a corridor is projected back on history - such as Arthur Evans reconstructing modern-style corridors at the ancient Minoan site of Knossos. I'm fascinated by the below-ground labyrinth of Wellbeck Abbey, and the revelation that until the 1810s schools were structured in "barn style" buildings, all the children in one room, perhaps a thousand of them taught by one teacher.  Segregation by age, gender, ability and corridor could dramatically change the effectiveness of education.

In discussing corridors in films, Roger argues that we're still haunted by - indeed, still live and work within - Victorian institutions and their architecture. A corridor crowded with zombies therefore resonates with us. But corridors can also be cheap to fashion and fill with fewer extras, making the most of limited studio space, and so easy to redress that a single T-section can represent a whole vast complex.

"All these corridors look the same," sighs Seth in the 1979-80 Doctor Who story The Horns of Nimon - in which the corridors really do turn out to be moved round and reused. Indeed, a lot of Doctor Who is people running through corridors. But then that should be a surprise as that's what they're for...
Posted by 0tralala at 9:23 pm

How interesting.. Corridors now included in my 'Oh dear' list which includes ventilation shafts you can crawl through and underground sewage tunnels which link the city....

Hello Michael! I wonder where the ventilation shafts thing comes from. They feature in the novel of Doctor No - but there, the whole point is they're been purposefully built for Bond to try and escape through, as part of some weird eugenicist test. (In the film, there's no mention of the test.)