The Subtle Knife, by Philip Pullman 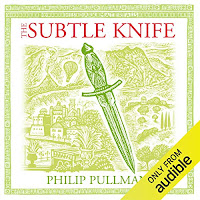 Will Parry runs away from home and then into another world, where he meets Lyra Silvertongue and seeks to help her. But soon they're despatched on a whole new quest, to find a special knife sharp enough to cut through reality...

A long and stressful drive through Storm Dennis on Saturday was much alleviated by the Audible audiobook of The Subtle Knife. As with Northern Lights, which I enthused about last year, this extraordinary version is read by the author, Philip Pullman, but with actors doing the dialogue. The cast includes Julian Glover and Stephen Thorne, but it's not (as my poor, tired brain kept thinking) Camille Coduri as Lyra.

The Lord of Chaos like the fact he already knew some of the plot as it has been in the TV version of His Dark Materials. The only jarring thing is that the audiobook has much less diversity in its casting, so that it took a moment to realise some of the people we hear are characters we already know from TV.

Another change is that in the TV adaptation Will is from Oxford - a condensed version of what happens in the book, where he's says (on page 62) that he's from Winchester and has run away to Oxford. On page 85, he says he goes to St Peter's School. St Peter's in Winchester is a primary school - I know because it's the primary school I went to; I left when Will must have been about two. Will is 12 in The Subtle Knife so he must be lying to the librarian who asks him. But I find myself wondering if that's where Will did go, even if he's since moved to a secondary school, and thus whether the eventful trip to the supermarket with his mum was at the Sainsburys at Badger Farm, the villains of the Consistorial Court of Discipline stalking the lanes of my own childhood.

It's a thrilling story full of arresting images and moral dilemma, and it ends with the shocking death of two principal characters that still packs a punch. The Lord of Chaos was hunched forward in his seat listening keenly for those bits, but admitted to zoning out for the talkier stuff - all witches and philosophy. We've already ploughed on into The Amber Spyglass and just need another long car journey to finish it.
Posted by 0tralala at 12:56 pm