Out of the Hitler Time by Judith Kerr 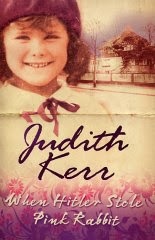 Judith Kerr wrote her extraordinary, semi-autobiographical novel When Hitler Stole Pink Rabbit (1971) in response to The Sound of Music. She was horrified that her son thought the film showed how her own childhood had been. So she wrote the story of nine year-old Anna, who's family fled Berlin in 1933, just as Hitler came to power.

I'd read it before as kid - it's still used in classrooms in the UK and Germany - and remembered the haunting simplicity of it, the way she doesn't quite spell out the dangers the family are facing. We understand the Nazi policy towards Jews from fleeting examples, such as two children who aren't allowed to play with Anna and her brother, and a growing sense of dread because of how Anna's parents behave.

At one point, the family heads from Switzerland to Paris, and a guard directs them to their train. Except, just as the train is about to depart, Anna realises it's a train for Stuttgart. They just escape in time, and the implication is that if they had gone back to Germany, they would not have survived. But worse is the hanging question of whether the guard directed them to the wrong train on purpose.

What's brilliant is how the events are filtered through Anna's perspective, so that we - the readers - often know more than she does about what's going on and what is to come. The family's great friend Onkel Julius insists on staying in Berlin, and that things will work out soon enough... As the situation worsens, we learn he takes solace in going to the zoo. So the true horror of the Nazis is brought home at the end of the book by a letter from Julius. It's a suicide note.


"And then, just before Christmas, the blow had fallen. Onkel Julius had received an official letter revoking his pass to the Zoo. No reason was given. The fact that he had a Jewish grandmother was enough."

In the recent Imagine documentary, Hitler, the Tiger and Me, Kerr confirmed to Alan Yentob that this was a true a story, and Julius a real friend of her father's. Kerr's response is extraordinary:


"Apparently, in 1938 they made a law that Jewish families couldn't keep pets and they had to be collected. You weren't allowed to kill your pet, you had to hand it over and didn't know what was going to happen to it. And then in 1942, when they must have had other things on their mind, somebody decided that mixed families - you know, if there was a marriage between a Jew and an Aryan and they'd stayed together - that they couldn't keep pets either. Who thinks of things like that? I mean, why?"

It's this response to the Nazis - not one of horror but of bafflement at the petty needlessness of the cruelty - that really lingers after the end of the book, when Anna and her family reach London in 1936. 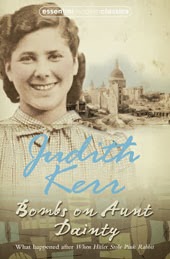 The story is then continued in Bombs on Aunt Daisy (originally The Other Way Round (1975)), with Anna in her teens during the war. Again, it's told in sparing, simple prose where she doesn't tell us everything and gets us to puzzle out the meaning.

Perhaps most horrific is the sequence on pages 89-90, where Anna's father asks a doctor friend to supply him with something secret. Anna, overhearing, doesn't quite know what's been asked for, and all we get is her parent's stricken response when she asks them. It's clear to us, though it's never said, that it's suicide pills.

Kerr's good, too, at the mounting dread among the community of refugees in London, listening to the news as Nazi forces trample yet more of Europe. And then, when we can hardly believe that there's any cause for hope, there's this transcendent moment:


"A familiar voice said, 'This is the BBC Home Service. Here is the news, and this is Bruce Belfrage reading it.'

The voice did not quiet sound as usual and Anna thought, what's the matter with him? It had a breathlessness, a barely discernible wish to hurry, which had never been there before. She was listening so hard to the intonation of each word that she hardly took in the sense. Air battles over most of England... Heavy concentrations of bombers... An official communique from the Air Ministry... And then it came. The voice developed something like a tiny crack which completely robbed it of its detachment, stopped for a fraction of a second and then said slowly and clearly, 'One hundred and eighty-two enemy aircraft shot down.'

There was a gasp from the people in the lounge, followed by murmured questions and answers as those who did not understand much English asked what the newsreader had said, and the others checked with each other that they had heard aright. And then the elderly Pole was leaping up from his chair and shaking Mr Chetwin by the hand.

'It is success!' he cried. 'You English show Hitler he not can win all the time! Your aeroplanes show him!' and the other Poles and Czechs crowded round, patting Mr Chetwin on the back, pumping his hand and congratulating him.

His grey hair became untidier than ever and he looked bemused but glad. 'Very kind of you,' he kept saying, 'though it wasn't me, you know.'"

For all the excitement and danger of the war - including a couple of moments when Anna is nearly killed - the story is really about how life carried on regardless: Anna going to the cinema, studying shorthand, eating a knickerbocker glory, buying her first pair of trousers and falling in love for the first time. She's especially good on telling details about how war intruded into life, such as the early days of the air raids.


"It was curious, thought Anna, how quickly one could get used to sleeping on the floor. It was really quite snug. There were plenty of blankets, and the heavy wooden shutters over the lounge windows not only muffled the noise but gave her a feeling of security. She never got enough sleep, but nor did anyone else, and this was another thing one got used to. Everywhere you went during the day there were people having little catnaps to catch up - in the parks, on the buses and tubes, in the corners of tea-shops. One girl even fell asleep over her shorthand machine at the secretarial school. When they talked to each other they would yawn hugely in the middle of a sentence and go straight on with what they were saying without even bothering to apologise."

At the same time, there's plenty on the horror of war - the sudden deaths of young men, the effect on Anna's parents and the awful state of one old refugee who was roundly beaten by the Nazis. 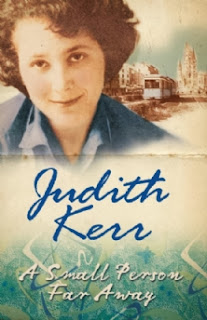 The final book in the trilogy, A Small Person Far Away (1978) is set over a week in 1956, when Anna - now married to a famous TV writer and with a new job as a writer herself - must rush to Berlin because her mum has attempted suicide.

In part, it explores the awful shadow cast by the war. Anna's mother is now involved with a man who's job is to help Jewish citizens seek compensation for all those they have lost - though, as one client Anna meets hauntingly demonstrates, how can anyone be compensate for the loss of all their loved ones? Anna's mother has been working as a translator in the war crimes hearings. But it's not this daily reminder of all the horrors committed by the Nazis that finally gets to her but something much more mundane: her lover has had an affair.

This awful ordinariness, this anticlimax, makes for a very different feel of story. Gone is the childlike sense of adventure and optimism, and instead there's a quiet despair.

It's assumed that, as the daughter, Anna will stay to look after her mother - whatever her commitments to her work and husband. And when her mother wakes, she only has eyes for her son. Whereas the previous books had Anna escaping the best efforts of Nazis to kill her, here the greatest moment of tension is when she's at a party, waiting for her husband to ring.

It's not that the book is such a great leap from the two before. It allows Anna to revisit the Berlin home she fled all those years before, and to tell us what happened to some of the characters we've met in the first two novels. And it ends with Anna flying back to London, let off from her duties to her mother because of the threat of war. The focus is still, during a crisis, to cling tight to those who matter, but that's no longer her mother and brother but her husband.

All the books deal with struggles of the artist - the effects of the exile on her father's writing, Anna's own education as an artist and the sensibility to find even the worst events "interesting", and then her struggles to balance her work with the needs of her family. Each book is written to the level of Anna's age - the first one for children, the second for teens and the third for grown-ups.

But this last book is the least dramatic, most personal and the most unsettling of the three. For all the horrors of the war, Anna's perspective on events and the simple style make the first two books enchanting, whereas the conclusion is hard work. But, perhaps because of that, it's the one I find myself picking over most, days after I finished it.
Posted by 0tralala at 5:09 pm