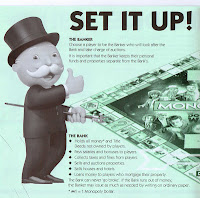 Splendid chums Nyssa1968 and Nimbos popped round yesterday for a contest of Doctor Who Monopoly, which I received for Christmas. The Dr won, quite spectacularly, with some loss to her leftie credentials. I'd forgotten quite how aggressive a game it can be, as you struggle to bankrupt your friends.

I was also much taken by two rules, both of such prominence to be included on the "Set it up!" spread. First,


"It is important that the Banker keeps their personal funds and properties separate from the Bank's."

After all my time transcribing debates in the House of Lords, I wanted to point out that something being "important" is not the same as it being a requirement, and that perhaps we should leave out, "It is important that", and change "keeps" to "must keep". (There could then be an hour-long debate on the legal precedent on "must" versus "may", which is always a favourite.)


"The Bank can never 'go broke'. If the Bank runs out of money, the Banker may issue as much as needed by writing on ordinary paper."

A cynic might say that this is exactly what got us into our current economic snafu. But perhaps I'm still reeling from John Lanchester's "Let's call it failure" in the current London Review of Books, which explains in plain and gossipy style just how bad things are:


"In June 2010, in his first budget, Osborne said the structural deficit was 4.8 per cent, and that with three years of reduced spending, the figure would be down to 1.9 per cent. ... If you reverse the creative accounting and add the interest from the quantitative easing back where it used to be, as a Bank of England asset, it adds 0.6 per cent to the structural deficit. That takes it back up to 4.9 per cent – higher than it was when the coalition came to power."