Shadow of Death and Logic

More of me that you can buy in shops. Next month, Doctor Who: Shadow of Death sees the Second Doctor and his chums on a remote world orbiting a pulsar. Frazer Hines is, as ever, utterly extraordinary at playing both the Doctor and Jamie, and narrating, while the magnificent Evie Dawnay plays a character I named after my GCSE astronomy teacher. 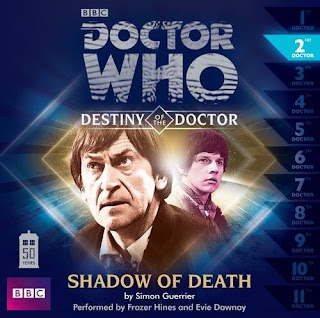 Then, in August, I have another Blake's 7 adventure: Logic. It's about Pol, an ordinary woman living an ordinary existence inside the domed city on Earth… until she is visited by strangers who bring chaos to her life. I'm thrilled that as well as starring Paul Darrow as Avon, Sally Knyvette as Jenna and Jacqueline Pearce as Servalan, my chum Louise Jameson stars as Pol. I wrote it with Louise in mind, and the nice people at Big Finish agreed she'd be perfect. Hooray!

Excitingly (or terrifyingly), Logic is part of a box-set so you'll also get Blake's 7 stories by Una McCormack and James Goss, too.
Posted by 0tralala at 2:56 pm