ZOMG! I love Simon Holub's amazing cover for Doctor Who and the First Wave, a play what I have wrote starring Peter Purves and Tom Allen. 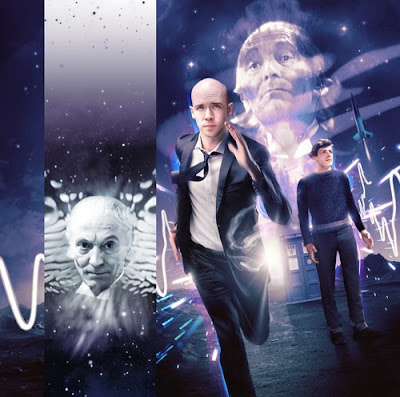 I don't want to be negative in any way, it's tremendous that you have written a play, congratulations, but I must point out that as a writer shouldn't you know better than "a play what I have wrote"? Try "a play that (or 'which') I have written" instead. Are you not aware of the recurring joke Morecambe and Wise used, "the play what I wrote" used ironically as it is an example of bad grammar and poor writing skills?

Anonymous, don't be so nesh.

Eric Morecambe was born in (surprise) Morecambe. The dialect of English spoken in coastal Lancashire retained and, to an extent still does retain, idioms which are not standard in BBC English, such as "them that" for "those who", and "wrote" for "written".

The city of Preston has not yet been able to forget the years Mr Guerrier spent among its people, so Simon is undoubtedly aware of the dialect.

As Pontius Pilate said, "What I of wrote, I of wrote".

Anonymous 2 again. What I was trying to say is "Lots of planets have a North".

I look forward to listening to it! Love the Companion Chronicles!