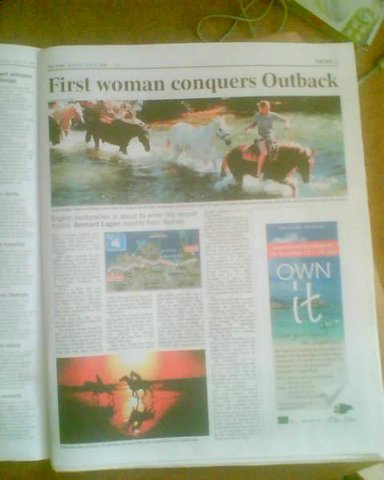 Good news first. Having blogged yesterday I popped to the shops for a copy of the Times - and was a bit surprised to find that the brother's jaunt occupies all of page 3. And he gets a credit for his precious photos.

He's on page 9 of today's Metro and all (I'm told - haven't seen a copy and it's not up on the site). Further media interest is due to follow...

As well as a paper, I also bought my first batch of Dr Who stickers, having been a bit late in the game. And I now have my first swapsies. The lucky numbers are: K; L; M; 65; and 184.

Suspect these might not be easy to get rid of as they're the ones free with Radio Times.

Have spent a day running about not buying a chair and trying to sort other things out. Full of adrenaline and sugar as things come together, so am a bit worried that it'll all fall to bits the moment the pressure's off, like the newly regenerated fifth Doctor delegating saving-everyone to K9, though the tin dog had left 10 episodes before...

I. has just texted to say that Syd Barrett has died, which makes me think of working into the evening on some meagre attempt at art, in a disused squash court with a wobbly tape of Relics playing over and over. And fellow (and more talented) artists squabbling about what they could put on instead that would be less weird, less funny and less unsettling.

Went to look at the obituary and what Bowie had to say, and see there's been more people blown up, and we're destined for more unclear power.