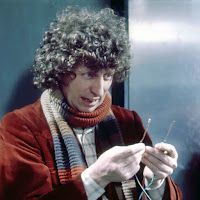 I'm the new producer of the Doctor Who: Lost Stories range - and Tom Baker's boss, which has been a delight. My masters at Big Finish have announced the two productions I'm currently working on - Doctor Who and the Ark and Daleks! - Genesis of Terror, both for release in March 2023.

As I say in the official announcement:

This is something very special: Doctor Who archaeology brought thrillingly to life. The Ark in Space and Genesis of the Daleks are among the best-loved TV stories ever. We’ve uncovered first draft scripts by John Lucarotti and Terry Nation that are exciting, surprising and very different.”

“Genesis is a very visual script packed with striking, stark images – Nation even makes the stage directions exciting. In Doctor Who and the Ark, the directions were more functional so Jonathan Morris has carefully adapted the script for audio. Though we’ve kept the original episode titles, such as “Puffball” and “Camelias” – I think Tom Baker enjoyed recording those! Oh, and wait till you hear that cliffhanger…

More details to follow in due course, but you can pre-order Doctor Who and the Ark and Daleks! Genesis of Terror right this minute.