Shadow of the Daleks 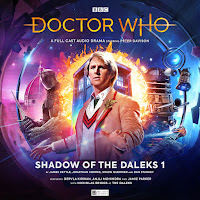 I've written one of the eight episodes of Shadow of the Daleks, a thrilling new audio adventure for the Fifth Doctor which is out later this year.

Written and recorded in lockdown, the eight 25-minute episodes are each written by a different writer and using the same cast of actors in different roles: Peter Davison (as the Doctor), Nicholas Briggs (the Daleks), Dervla Kirwan, Anjli Mohindra and Jamie Parker.
The blurb for mine goes like this:

Something is very wrong. The Fifth Doctor is lost in the Time War, heading for an encounter with his oldest and deadliest enemies... the Daleks!

The Bookshop at the End of the World by Simon Guerrier
It’s very easy to forget yourself and get lost in a bookshop. But in some bookshops more than most...