Frankenstein in Baghdad, by Ahmed Saadawi

In the chaos of war-torn Iraq, even claiming the body of dead loved one is difficult. Hadi, a junk dealer, collects scraps of different corpses and stiches them together into a single body in the hope - he claims - that it might have a proper and dignified burial. But the patchwork figure is then inhabited by the soul of another dead person, and animated by the longing of a mother for her long-vanished son. The creature awakes... and immediately seeks revenge on all those it has been murdered by.

Frankenstein in Baghdad is a shocking, often queasy read, Jonathan Wright's translation of Ahmed Saadawi's original Arabic full of visceral detail. It's not just the monstrous creature - the police routinely beat and torture suspects, gangs molest citizens, there is sectarian violence. And yet this is a black comedy, with an eye for the foibles of ordinary people.

One example is the dilemma faced by Mahmoud al-Sawadi, a young journalist, who once wrote a piece about a criminal called Mantis.

"The Mantis's brother had led a small gang that terrorized the locals until he was arrested and detained. The news of his arrest was greeted with great joy by many, including Mahmoud, who then wrote a newspaper article about the need to enforce the law against this criminal. He philosophized a little in the article, saying there were three types of justice - legal justice, divine justice and street justice - and that however long it takes, criminals must face one of them." (pp. 165-6)

This article earns Mahmoud esteem and praise, until the Mantis's brother is set free - another example of corrupt, incompetent policing in the novel. When a rival gang then kill the brother, it seems Mahmoud's philosophy is right - but Mantis has taken exception and Mahmoud must flee the town. Years later, Mahmoud considers returning home but is assured that he's still remembered.


"Don't come. Don't show your face. Stay where you are, for God's sake, unless you want the three forms of justice applied to you. Now the Mantis often talks about them, even on the radio. He's stolen your idea." (p. 169)

The novel stitches together the strange and the mundane to create a whole of its own. I found it a little slow to get going, with too many characters I couldn't keep track of. But that's then its power: we get to know these people and their interweaving stories.

There's magic - in the old woman whose longing brings a patchwork corpse back to life, and the astrologers whose accurate predictions don't help them save themselves. There's the suggestion that this is all real, carefully researched and documented by the writer from primary sources. And at the end the different characters all reach some kind of closure, our last sight a principal figure curled up with a stray cat and apparently free of the anger that drove so much of the story. If it starts as a story about the ravages of war, the injustice and desire for revenge, it concludes with a sense of peace.

Incidentally, none of the three books I've read this week won the Clarke Award last night, which went to Tade Thompson's Rosewater, which looked great. I was at the ceremony and, as well as seeing lots of old friends, got to meet Aliya Whiteley, whose work I've admired for so long. Afterwards, we were escorted to the Ice Bar, which was cool. 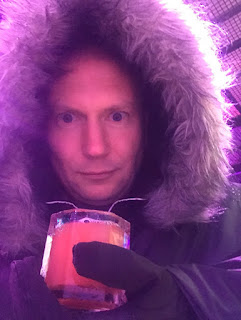