No handlebars and no brakes! 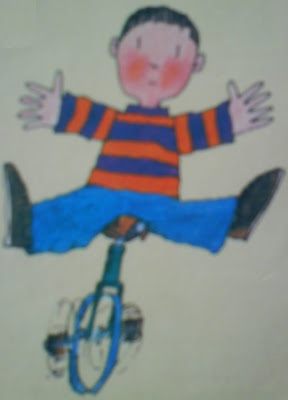 This week I have mostly been feeling like the eponymous Mark of Mark and his Monocycle, the classic work by David McKee, which no one else seems to have heard of. Basically, Mark finds a monocycle and antics ensue. I had a stripy top just like that, too.

My own freewheeling escapades began on Saturday with a trip down to Winchester. Had my picture taken by Joe Low, along with the two young winners of the Doctor Who story-writing competition set up by the Winchester Festival in the summer. Tried not to look too nervous or awkward. Bet they use the ones of me thumbs aloft.

It's odd being an authority on Doctor Who books at the Discovery Centre; 25 years ago, that's where I borrowed Doctor Who books myself. They also had a swap-box for comics which was very heaven.

Then up to Manchester on Sunday for Novelcon in the award-winning Lass O'Gowrie. Met a whole bunch of splendid people I'd not met before – including Ade Salmon, who I employed for two years. The afternoon passed in a blur. Nicely had the steak-and-Black-Sheep pie with a pint of Black Sheep – which is a bit like having your pants and socks match. Saw the brother-in-law and his new new squeeze, and an old schoolmate of mine from pre-history. Wittered on about Dr Who books to anyone who'd listen, then dashed back home again.

Spent the next couple of days trying to finish a piece of writing, but the Dr did take me out to the launch of Science Fact, Science Fiction, Camden's Black history season. Maggie Aderin-Pocock gave a funny, lively talk about her desire to get out into space, and suggested something not so dissimilar to an idea I had rejected by CBBC earlier this year.

Then on Wednesday I shlepped up to Leeds to take part in the Morley Literature Festival, where me, Robert Shearman, Mark Morris and Mark Michalowski wrestled for the public's amused. Got back in time yesterday to make a talk on the uber-racist Robert Knox at the Petrie Museum. Big Finish had Knox played by Leslie Philips; I wonder who they'll get for the Pegg-Tennant movie?

Finished a draft of the writing thing this morning, and already got rewrites on something else. Am on Gold Usher duties for a wedding from this evening, and got three days of recording next week. So plenty to get on with, and then off to Orlando on Monday week for what might even be a bit of a holiday.
Posted by 0tralala at 3:58 pm

I have vague memories of Mark and His Monocycle: it might have been on my primary school's library shelves. The term "monocycle" is rather odd to me, but alliteration is a terribly tough taskmistress. And I suppose Uriah and his Unicycle would have been just as peculiar.

I keep reading that wrong and thinking it says "Mark and His Monocle."