Amazon have cover, cast and blurb for my forthcoming Blake's 7 plays - "The Dust Run" and "The Trial". 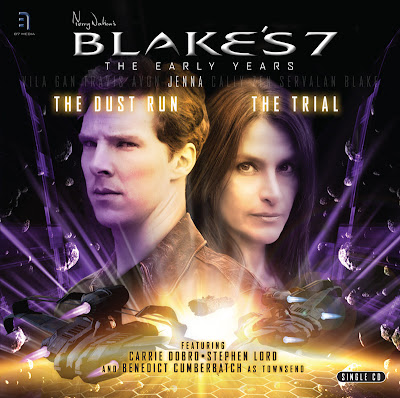 Back as the re-imagined Jenna Stannis is Carrie Dobro. Benedict Cumberbatch - soon to be seen as Sherlock Holmes in the new series from Mark Gatiss and Steven Moffat - plays Townsend, and Stephen Lord - off of EastEnders - is Nick. Which is a good name for a thief.

I went along to the recording at the end of October, and the cast were simply magnificent. Hooray!

In the lead-up to the release itself, we'll be posting up all sorts of behind-the-scenes stuff at Blakes7.com. Have to write something for that myself. Lawks.

ETA: Ben Aaronovitch blogs that I'm useful as a shield.
Posted by 0tralala at 12:42 pm